All sports are about games of space, time and relationships..
Time is one of the four biggest concepts of sport. Time matters. In swimming and racing, time matters greatly.

At the Olympic Games, the finalists race for podium positions. That's when the-best-of-the best step upon the starting blocks and race to determine who gets what color of medal -- or else – no medal at all. Getting fourth place in the Olympic Finals is sometimes known as its heartless name, “first loser.”

In the Olympics, touching the finish wall first, before the opponents, is paramount. Meanwhile, in the other 99.999% of the races among serious swimmers from around the world, the relationship among the finish order as to who captures first, second and third, takes a minor position. Nearly always, time matters most of all.

We strive for days when all the participants in a swim event all improve upon their lifetime-best times. Personal records and improvements in race times provide motivation for swimmers. The question, "What's your time?" is often heard in early discussions among acquaintances. Sharing a time or two is a way to discover a mutual background for competitive swimmers.

Stop watches have been the universal tool for swim coaches.

Stopwatches record time and the AutoCoach Smart Watch has a set of enhancements to help coaches, swimmers and others get better grips on the specifics of time.

One of the first keys to mastering the AutoCoach stopwatch is the control of the buttons. 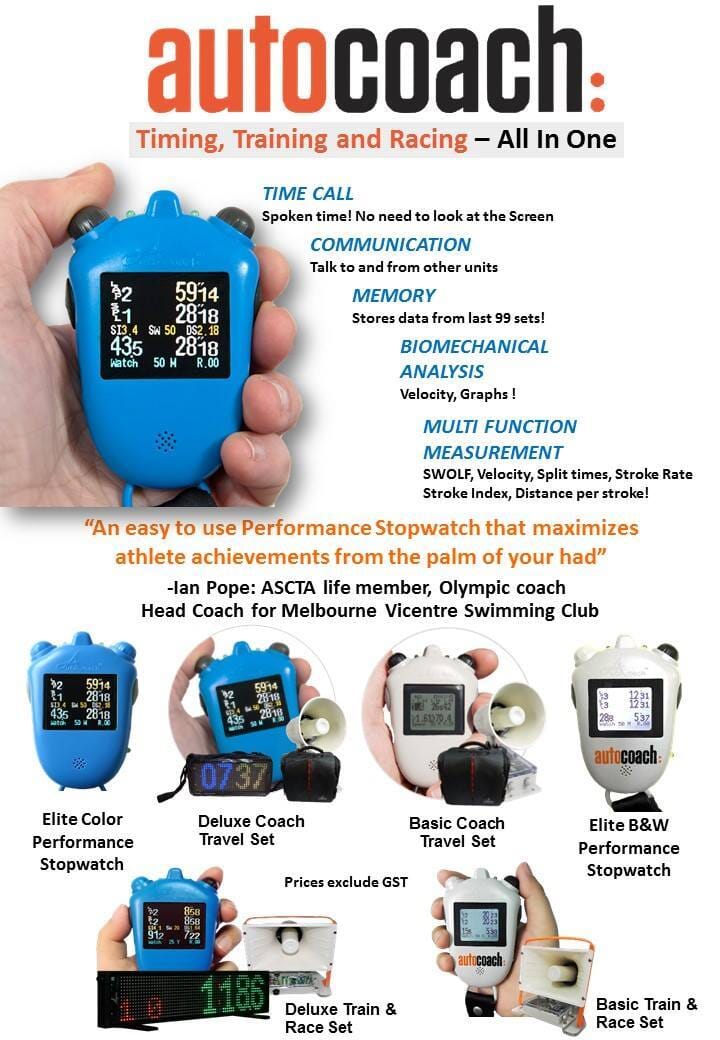 Button pushing is not as simple as Off and On with the AutoCoach Stop Watch.

It takes a bit of practice to get used to the different touches and presses of the buttons, especially the two big buttons at the top, one of the right and the other on the left.

The quick press of a button, more like a hard tap, causes a different result in some situations as contrasted with a long press of the same button. The LONG PUSH happens when the button is depressed and kept down for an extended moment. The quick press is just down and up again without being held down.

Tip: In the excitement of a race, especially in a relay, the finger needs to remember to activate the proper pushing motion.

Quick taps or long push – be aware and be careful.

Coaches that tend to get excited when cheering for a relay team can blunder and blown the watch's operation and miss relay splits by crashing the finger into the button and keeping it pressed. Psyched, overly excited, and feeling the relay exchange with the finger on the watch. Woops.

To taking a split time with the watch and to keep the time progressing in the watch -- running for future splits and the the eventual final time -- make a quick-push, just a tap on the button. The LONG PUSH at the end of one leg of the relay stops the watch and and makes the following split impossible.

As a workaround, perhaps you've got a second watch running. Perhaps you can get the split for the next swimmer off of the scoreboard or the final results. Or, perhaps you can get a re-start of the watch at the next wall and still get accurate the splits of the relay members yet swim their legs of the relay. The LONG PUSH that soils the split taking when in an on-going race is a rookie mistake that takes some getting used to so as to be avoided in the races and meets to come.

The watch mode with the AutoCoach stop watch has some drastically different personalities depending upon the settings or preferences under the hood. This calls for a visit to the SETUP mode so the brains of the watch can be flipped to your desires.

After entering the SETUP Mode, the word, “Setup” appears on the lower left corner of the display window. The line that says “Rate Count” is the value to focus upon. The line can read one of the following:

That's it. No rate count value is greater than three.

To adjust the various values and settings of this line in the SETUP mode, twist the top right button to the left or to the right. Twisting gives a slight chirping sound (if the watch's volume had been set loud enough). Play close scrutiny to the number and the direction of the twisting as changes are hard to notice among seven lines of information. Only one character changes its value – or not. Every twist makes a sound, but every sound may not make a change to the screen as the value may already be at the end of its line. Turning the dial on the top right button past 3 does nothing. So, if the watch's screen reads, “Rate Count 3” and one twists the dial even higher, the watch is still always going to read, “Rate Count 3.” Chirp, chirp, chirp for twist, twist, twist but no changes to the display as it is always “Rate Count 3.”

Most of the time, A coach is going to want to operate the watch with the setting at “Rate Count 0.” That setting, with Rate Count ZERO, translates to, "I don't care at all about rate count. Rate counts are meaningless, worth nothing." The watch won't provide and display any stroke rate counts when it is set at Rate Count 0. Rather, the watch awakens the right side buttons for other tasks. Rate Count 0 shuts down the capacity for timing of rate counts and turn on the capacity to have two stopwatches operating within the same watch, but on different buttons. With Rate Count 0, there becomes both a left-side stop watch and a right-side stop watch. This allows for the coach the ability to time two athletes or two relays in the same heat at the same time.

With Rate Count 0 established in the SETUP mode, exit the SETUP and go to use the watch with the capacity to serve in the place of TWO watches within one device.

Before exiting the SETUP MODE, lock down the settings. Push the RIGHT BUTTON and hear the happy sound, “Store.” A hint appears on the screen under the right button that reads, “Save.” with an arrow pointing to the button. Nice tip. SAVE the setting. Store the options into the watch's memory. Then, it is okay to depart the SETUP mode and begin to time.

To depart the SETUP mode, depress the grey side button on the LEFT and twist the LEFT top button and scroll around to the various mode options. Hold the watch in the left hand and use your left thumb to depress the side button on the left and HOLD IT DOWN. Then reach with the right hand behind the watch so that the finger and thumb of the right hand holds the left top button and can twist it. Turning the LEFT BUTTON while depressing the LEFT SIDE BUTTON switches MODES.

The AutoCoach Smart Watch has about 10 different modes. They flash one after another in an endless cycle. No chirps. No end of the line. When you've past the last option, the modes repeat in a loop. If you pass beyond the mode you were attempting to reach, reverse the twist. Twisting the button in the other direction reverses the flow of Mode Options to the most recent option displayed.

The order of the modes is not important. Some modes have come and gone on the watch depending upon the software updates, firmware versions and who knows what is to come in the future. One of the favorite modes, for example, SCORE, was removed from the watch's cascade of various modes after an update a couple of years ago. Oh, well.

The various MODES are confusing at first. It takes some time to explore and understand what each mode does and how to use it in everyday settings. And, as is the case with the “Rate Count 0” value in the Setup area, the personality of the WATCH mode changes.

Slogging forward, with “Rate Count 0” in Setup, and landing in the MODE called WATCH, let's time get to timing and using the stop watch. Well, to be clear, we're not using just ONE stop watch, we're using two stop watches in one.

Long press on left button when all watches are stopped is a reset to off and empty display of times.

Let's begin with a reset of the watch and the zapping of all the times from the screen. Stop the watch by LONG-PRESS on the RIGHT BUTTON. Then do a LONG PRESS on the LEFT BUTTON.

React to the starter's beep to begin the race

At the start of the race, LONG PRESS on the RIGHT TOP button. That long press begins BOTH the left and right time functions. Lights on the top of the watch on both sides begin to blink as the watch is timing. The blinking lights signal that both sides are timing.

A mental picture at this point is necessary to help with button pushing consistency and watch execution as it is easy to fumble and push the wrong button and screw up the splits. At the first meets, a coach who is timing two swimmers on the same watch might forget what button to push for each of the respective swimmers. To curb the frustration of a poor memory in the heat of the meet as swimmers travel back-and-forth up and down the pool, I always point the middle of the stop watch at the starting blocks as an orientation. The swimmer on the left gets the left button and the swimmer on the right gets the right button.

Likewise, at smaller meets or at a practice time trial, with two watches, one in each hand, it is easy to time four swimmers within the same heat. At the start, set the orientation and face the starting blocks. Swimmer to the far left gets left hand's left button and so on.